KRSNA in the comic book industry

below is an earlier draft of the article appearing in the current Back to Godhead Magazine for those who might be interested in more details of the story.

­­Many of the most popular and top grossing films these days are based on comic books and it is no surprise that Krsna has appeared in these films in various ways.

The popularity of this genre is not limited to movies.  From action figures, to clothing, to Halloween costumes, to school supplies, to limited edition breakfast cereals, we see the market saturated with super hero paraphernalia.  And it is not just kids who are hooked on these costumed crusaders of truth and justice.  Adults also admire the positive messages that pervade these stories and are inspired to support or perhaps even become real life heroes who dedicate their lives to making the world a better place. 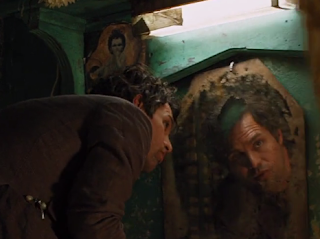 The 2012 release of Marvel’s “The Avengers”, which raked in 1.5 billion dollars worldwide, making it number five in the top grossing films of all time, shows Dr. Bruce Banner (the incredible Hulk) treating a patient in a small cottage in the outskirts of Kolkata, India.  Above Dr. Banner’s shoulder (as if representing the good conscience) while he is washing his hands, is a painting of Makan-chor Krsna stealing butter from a clay pot (pictured right).

In December, 2015, the mention of Krsna’s name in the trailer for “X-Men Apocalypse” sparked quite the controversy, inspiring many enraged individuals led by Hindu statesman Rajan Zed to petition against what they considered to be a misrepresentation of their culture.  Many media outlets including Time magazine online covered this story and the film’s director Brian Singer agreed to remove Krsna’s name from both the trailer and the movie itself.

The reason for the abovementioned protest was that Krsna’s name was uttered by a blue skinned villain hell-bent on destroying the world while claiming to be an incarnation of God.  While it is understandable that we would not want to equate God with an evil homicidal maniac, the context of this utterance reveals that the villain (like most evil-minded entities) was merely claiming to be God, and Krsna was just one of the names that he mentioned while doing so.  The list of names Apocalypse claimed to be known as also included Ra and Yahweh, covering the accepted names of the Egyptian and Judeo-Christian deities as well.  Although the movie trailer in question received over 51 million views on youtube, moviegoers did not hear Krsna’s name in the actual movie due to the petitioning of concerned citizens.

Others, of course, assert that since it is beneficial to hear Krsna’s name under any circumstance, be it indirectly, in jest, neglectfully, etc., that it would have been much more beneficial to allow the name to remain in the movie and consider the protest to be a disservice. 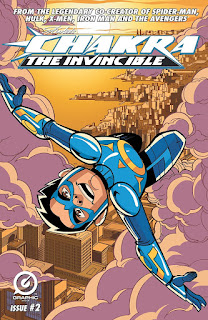 With the popularity of the comic book genre on the rise and the current world trend in producing multi-cultural presentations, we also find works like Stan Lee’s “Chakra, the invincible”, which, along with it’s comic book series and 2013 animated Television film, is also set to release a live-action Bollywood movie.  In this particular franchise, a young Indian boy named Raju wears a special suit that allows him to access the chakras in his body so that he can perform magnificent feats such as levitating objects, creating force-fields and shooting energy blasts.  With these powers, Raju is able to keep the streets of Mumbai safe from criminals, unfortunate lab experiments gone awry, and bhogi yogi’s.

“Chakra, the invincible” has various Vedic cultural references and Graphic India, the company who produces it, is also responsible for two other titles that are more specific to, and focused on Krsna.

The first is Grant Morrison’s “18 days”, which is a series that tells the story of the battle of Kuruksetra.  Although the author took some liberties such as implementing modern tech and abbreviated names, this series is a big step up from the large hard bound book of the same name produced in 2010 where Krsna was depicted as a blonde haired, pointy eared elf, wearing red garments.  The newer installment of 18 days (2015-current) is a much more accurate portrayal of the events in the Mahabharata. 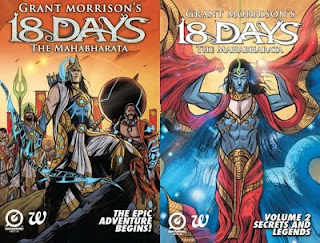 Grant Morrison is also set to release a series entitled “Avatarex” which is meant to be read as Avatar-X with the “X” being a roman numeral ten, referring to Lord Vishnu’s tenth incarnation, Kalki.  In the preview to this series, Lord Kalki is illustrated as being produced in some techno-lab where the previous nine avatars have already been harvested from their shattered glass capsules.  As He is awoken, the narrator (a space satellite called Shamballa) explains His purpose of destroying the world at the end of Kali-yuga, but then Shamballa begins calling Avatarex too proud and arrogant, claiming that He must change His attitude.  As only the preview of this book is available so far, I am not sure where Grant Morrison is going with this one, but it seems that he will take similar liberties as those he took with 18 days, and perhaps even change the story in this case.

The reason why it is difficult to interject an all-powerful being like Krsna into mainstream storytelling is that the common man wants to be able to relate to the heroes of said stories.  Many comic book authors claim that a hero has to have some sort of imperfection or weakness so that his story is more believable and more interesting.  Their theory is that people will accept that a boy can climb walls and shoot webs from his wrists, but only if we humanize him by burdening him with tedious school work and girl troubles.  The common man does not want to read a story about someone who is completely perfect because he knows that it is unattainable.

Many times when a “god” is introduced in comic books, he is written off as merely a powerful alien, but with certain flaws or limitations.  In that regard, it may be a while before we see a fully accurate portrayal of the Vedic stories we know and love hitting big in the mainstream.

This, of course, does not mean that Krsna’s pastimes cannot be accurately depicted in comic books without imposing imperfections on Him or equating Him with an alien or mythological character in order to accumulate an expansive fan base.

In this iron age of Kali-yuga where men care more about politics, sports and self-aggrandizement than they do God-consciousness, it is no surprise that comic books about costumed vigilantes fighting alien forces will be more popular than their spiritual counterparts.  But when it comes to transcendence, popularity does not determine value.

For that reason, I have decided to produce graphic novels that allow readers to experience the culturally rich stories of the Vedas without altering their valuable messages.  The first book that I published tells the story of Lord Narasimhadeva from the Seventh Canto of the Srimad Bhagavatam in 74 full-color pages with beautiful illustrations by Bhakta George Marnero of Bulgaria.

Throughout the last two decades I have told the story of Lord Narasimha at least a hundred times to various people.  From curious customers where I used to work, to family members, to budding spiritual seekers, every one of them very emphatically expressed their appreciation of the poetic justice that this ultimate story of good versus evil conveys.  Many of these eager listeners had me tell the story multiple times so that they could get the details right when they retold it to their friends. 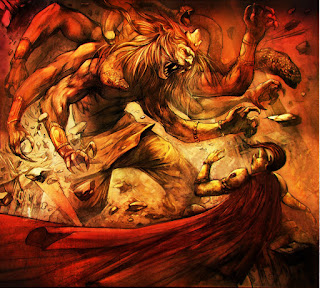 This particular story is often prompted when someone sees one of the famous illustrations of Lord Narasimhadeva disemboweling the demon Hiranyakasipu who tried to kill his saintly son.  Due to the graphic nature of this pastime, this story is often acted out in a dramatic play or skit, which is perhaps the reason why most devotees have experienced the story in this way rather than by reading it in a book or hearing it in a class.

In order to make this highly appreciated and morally rich pastime more accessible to people of all backgrounds, I have carefully adapted it to a graphic novel while preserving the spiritual message conveyed in the Srimad Bhagavatam.

A preview of this book can be viewed at SunandaProductions.com, and if this first publication is well received, I will gladly continue producing other stories from the Srimad Bhagavatam in this format.  The next graphic novel I plan to write will tell the story of Lord Varahadeva.  There is virtually no end to the amount of Vaisnava stories that can be produced in this medium and I hope to continue making them available to a much wider audience.
Posted by carucandra dasa at 4:16 PM 2 comments: